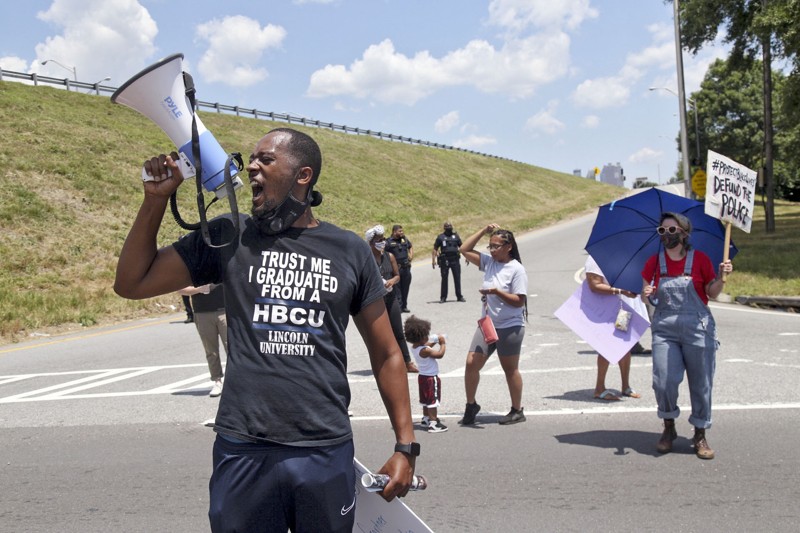 In Atlanta, protests continued throughout the day and night on Saturday following the death of 27-year-old Rayshard Brooks. Brooks was shot and killed Friday night at a Wendy’s by an Atlanta police officer.

The incident prompted Erika Shields to step aside as Atlanta Police Chief and the officer who shot Brooks, Garrett Rolfe, to be fired. The shooting happened less than a month after a police officer killed George Floyd in Minneapolis, which prompted protests in cities across the world, including days of demonstrations in Atlanta.

On Sunday, Brooks’ death continued to prompt responses from prominent voices, with everyone from celebrities like 50 Cent and Kim Kardashian to political figures like Elizabeth Warren, Ben Carson and Rudy Giuliani weighing in.

In the statement from the Urban League of Greater Atlanta, president and CEO Nancy Flake Johnson, said the group condemns the shooting and is calling for systemic change. Johnson’s statement reads in part:

We are deeply saddened yet again by another senseless shooting death, this time of Rayshard Brooks. Our hearts and prayers go out to his family, the people who loved him, and our communities that live with the daily trauma of brutality and violence. Our anguish runs deep through our souls, and we ask how many more lives will be lost before the killing stops. Mr. Brooks, at 27 years old, is now another victim in the painfully long list of black men and women brutally killed by police using excessive force instead of de-escalation tactics in their interactions with people in black and brown communities. This should have been a “wellness check” instead of an arrest. This must stop!!

ACLU of Georgia executive director Andrea Young issued a statement saying that the group grieves with Brooks’ family “and with the community in Atlanta already reeling from the tragic deaths of Ahmaud Arbery, Breonna Taylor, George Floyd, and so many other victims of systemic racism in America.”

Our nation is based on constitutionally mandated due process under the law and provides for elaborate judicial proceedings to determine whether due process requirements have been met before life and liberty can be taken. Yet, police officers continue to deny due process by acting with impunity as judge, jury, and executioner of unarmed Black citizens.

We have seen states and cities across America rise to the challenge of divesting resources from armed response. Cities and states are placing specific restrictions on law enforcement’s use of force and transferring public resources to invest in community solutions.Protesters, activists, politicians, youth, faith, business and community leaders must come together to bring about structural change. Atlanta must lead the way to reimagine public safety so that it is assured for all members of our community.

Meanwhile, the Georgia chapter of the Council on American-Islamic Relations (CAIR-Georgia) said they are “calling for the Fulton County District Attorney’s Office to order the immediate arrest of the officer who shot and killed Brooks.”

“A phone call about a man sleeping in a car should never escalate into a police shooting,” CAIR-Georgia Executive Director Abdullah Jaber said in the statement. “A taser is not a deadly weapon and shooting a man multiple times in the back while he’s running away is the epitome of police brutality. The videos speak for themselves, and we need immediate accountability.”

Bernice King and Meria Carstarphen both highlighted Brooks’ family. Brooks was the father of three daughters and a stepson. In a tweet, King said “#RayshardBrooks’ daughter was waiting for him to come home to celebrate her birthday. But her father is not coming home. That’s devastating. My heart goes out to his family.”

Carstarphen called on community members to contribute to a GoFundMe campaign set up to help  Brooks’ children and their mother. In the tweet, said Carstarphen said “100% of funds go to mom and kids.” As of Sunday afternoon, the campaign had raised nearly $35,000. According to the online donation page, the collection was started by Stewart Trial Attorneys.

Always remember those left behind.#RayshardBrooks’ daughter was waiting for him to come home to celebrate her birthday.

But her father is not coming home.

My heart goes out to his family.

My love to his daughters. pic.twitter.com/A9mgSOW08p

Mr. Rayshard Brooks is survived by family members who are in mourning, as are we all. His child’s mother has asked our school community for support during this time of need. With her permission, sharing https://t.co/h65vVaUO3a (100% of funds go to mom and kids).

Screenwriter and producer, Steven Canals, who co-created the show Pose, also tweeted about Brooks’ life as a dad. “He was a working dad. He just wanted to go home to his family,” Canals wrote on Twitter.

He was a dad. He was going home to his daughter to celebrate her birthday. She already had her dress picked out. The day before he’d taken her to get her nails done & played games at an arcade. He was a working dad. He just wanted to go home to his family. #RayshardBrooks pic.twitter.com/RA8TDWY5op

Others on social media, like Shannon Watts, the founder of like Moms Demand Action, reacted to the body camera footage of the incident that was released this weekend.

Body camera footage revealed Atlanta police officers only found a wallet on #RayshardBrooks in a search carried out shortly before he was killed.

The Atlanta Police Dept announced the officer who shot Brooks has been fired. No charges yet from the GBI. https://t.co/bQdpXGD2gb

Former Democratic presidential candidates Elizabeth Warren, Pete Buttigieg and Andrew Yang both addressed the shooting on Twitter. Sen. Warren praised Mayor Keisha Lance Bottoms, saying she was “right to respond quickly to the death.” Bottoms held a 5 p.m. press conference on Saturday, during which she announced she had accepted Shields’ resignation. However, as of Sunday afternoon, the mayor had not posted on social media yet.

Why would you shoot a drunk man running away from you with deadly force? #RayshardBrooks should be alive today – he fell asleep at a drive-thru and is now dead as a result of police action. This has to end. https://t.co/V7TihCPttt

While several voices showed support for the demonstrations in Atlanta that temporarily shut down the interstate on Saturday night, Rudy Giuliani argued the use of deadly force may have been justified. On Twitter, he said “Whatever the Atlanta shooting is, it is not the George Floyd case.”

Local leaders, including Bottoms and Atlanta City Councilwoman Joyce Sheperd, have said they do not think the shooting was justified.

Whatever the Atlanta shooting is, it is not the George Floyd case.

This video appears to present circumstances which may justify this use of force.

The only responsible position is to suspend judgment until a full investigation is done.

In an interview on “Fox News Sunday,” Ben Carson, Housing and Urban Development Secretary, shared some comments about Brooks.

“We don’t know what was in the mind of the officer when someone turns around and points a weapon at him. Is he absolutely sure that’s a non-lethal weapon? This is not a clear-cut circumstance,” Carson told Chris Wallace.