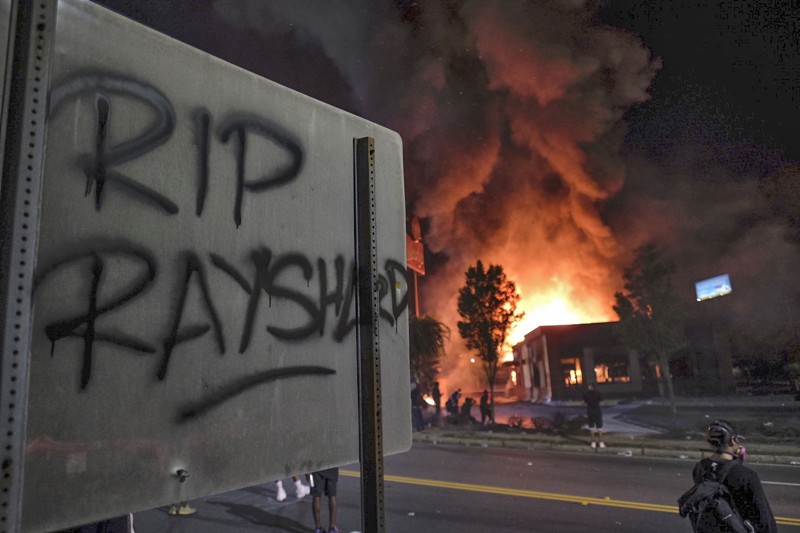 A white Atlanta police officer fatally shot an African American father of several young children late Friday night following a struggle outside a Wendy’s restaurant on the city’s southside, sparking calls for reform and demonstrations that led to vandalism and arrests.

Video of the shooting of 27-year-old Rayshard Brooks, who had allegedly fallen asleep in his car and blocked the restaurant’s drive-through, went viral across social media. Protesters marching for a third weekend in Atlanta for justice for Floyd and other black men and women killed by police quickly demanded a full investigation Saturday of the Brooks shooting, and the Georgia NAACP called for the termination of Atlanta Police Chief Erika Shields.

Bottoms called Shields “a solid member of APD for over two decades.” Shields offered to step aside to help rebuild trust in the community, Bottoms said.

“What has become abundantly clear in the city of Atlanta is that while we have a police force full of men and women who work alongside our communities with honor, respect and dignity, there has been a disconnect with what our expectations are and should be as it relates to interactions with our officers and the communities in which they are entrusted to protect,” Bottoms said.

For days, metro Atlanta protests had remained peaceful. But by dusk, the crowd outside the Wendy’s surged onto the Downtown Connector, leading to arrests. Demonstrators knocked out windows of the fast food restaurant and set the building on fire, and police deployed tear gas.

Police responded to the Wendy’s at 125 University Ave. about 10:30 p.m. after receiving a complaint about a man sleeping in his vehicle, blocking the drive-through. Officers confronted Brooks, who authorities said failed a field sobriety test. A struggle broke out as police officers attempted to arrest Brooks.

Video posted on social media showed Brooks on the ground wrestling with two white Atlanta police officers in the parking lot. Officers attempted to use a Taser on Brooks, who was able to wrestle the stun gun away and flee as officers give chase. Shots are heard but not seen in the video.

Restaurant surveillance video released late Saturday by the GBI shows Brooks running away and then turn and appear to fire the Taser at the pursuing officers.

“And as he turned it over,” Reynolds said of Brooks and the Taser, “you’ll be able to see on the video the Atlanta officer, literally reach down to get his service weapon and as he gets his weapon, Mr. Brooks begins turning his body away from him, I presume to flee.

“And, it looks like that’s when the discharge … of the weapon goes off,” Reynolds said. “It’s just like that, literally.”

Authorities said three shots were fired. Reynolds said he asked Fulton County District Attorney Paul Howard’s office if it had any objection releasing the video, and prosecutors said they did not.

“It’s helpful if you see what we see,” Reynolds said of the video. “People have a right to know what happened, how it happened.”

Reynolds said the video would be enhanced by the agency’s lab. The GBI interviewed witnesses and is reviewing body camera video and footage from social media and the restaurant. One officer’s body camera was damaged or knocked off his body during the struggle, Reynolds said.

The agency will investigate the matter and turn its findings over to Howard’s office, which will decide if any charges are warranted. Howard, who is facing a primary runoff against Fani Willis, a former chief prosecutor, announced his office had started its own investigation.

Atlanta police union representative Ken Allen said Shields will be missed as she helped boost morale and won significant pay raises for the department. Allen said cops feel like they’re subject to a double standard in which a Taser, if used by police, is seen as a weapon, but a Taser used by a suspect against officers isn’t viewed as a threat.

L. Chris Stewart, an attorney for the Brooks family, said in a news conference late Saturday that Brooks leaves behind three daughters and a stepson. Stewart also discounted much of the police’s official report, citing witnesses the lawyers have interviewed.

Stewart said a Taser isn’t considered a deadly weapon in Georgia law, and the officer’s life was not in danger.

“He had other options than shooting a man in the back,” Stewart said.

At the Wendy’s restaurant Saturday morning, tensions were already high.

A crowd of a few dozen chanted “No justice, no peace!” Outside the restaurant, a woman held sign reading, “Another Black Man Was Killed In Your Neighborhood.”

“This is the new ground zero,” said John Wade, an organizer of some of the demonstrations in recent weeks. “Another man was taken right at this spot.”

As protesters blocked traffic, they showed a clip on social media to Atlanta Police Major C.T. Peek, who came to help with crowd control. Asked by a woman if the shooting was “a justifiable murder,” Peek said, “I can’t say, because you can’t see the actual shooting.”

“What I saw on the video was not justified, period,” she said.

“The first thing that came to those officers’ minds was to shoot,” Griggs said. “They didn’t have to shoot.”

“We’ve got to have real community policing where the community and police are not at odds and are cooperating,” Fort said.

On Monday, state lawmakers will return to a legislative session interrupted by the coronavirus pandemic. Demonstrators by the thousands are expected as a hate crimes bill is expected to be on the agenda. Georgia is one of the few states without a hate crimes bill.

The Rev. James Woodall, president of the Georgia NAACP, told reporters at a 2 p.m. conference call that he did not believe Brooks did anything to deserve death. He said his group and the Atlanta NAACP are investigating the incident, and he criticized Bottoms and senior Atlanta leaders for not speaking out about the incident for hours after it happened.

Woodall said the Georgia NAACP will push for the hate crimes bill and march Monday against police brutality.

“They have the power to do legislation and they should use that legislative power to save our people,” Woodall said.