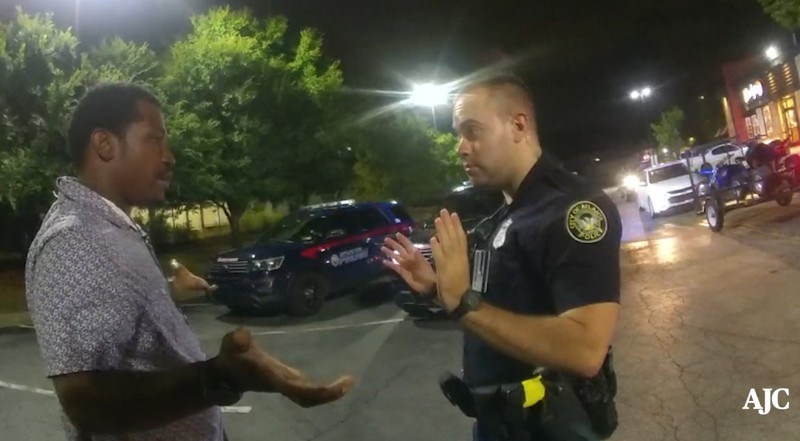 Video footage released by the Atlanta Police Department show officers talking for nearly half an hour with Rayshard Brooks in a Wendy’s parking lot. The encounter would end with Brooks fatally shot. Hours later came the announcement that the city’s police chief had stepped aside and that the officer who shot Brooks had been fired.

By nightfall, the Wendy’s just south of downtown was in flames.

Former Officer Garrett Rolfe is 27, the same age Brooks was. Attorneys for Brooks’ family say he left behind four children, three daughters and a stepson.

“Are you not tired of seeing cases like this happen?” attorney Chris Stewart, hired by Brooks’ family, asked reporters at a press conference later that evening.

Deadly force should have never come into the equation, Stewart said.

“(The officer) had other options instead of shooting him in the back,” he said.

Police body and dash cam video of the incident was released overnight by APD. At first, there was nothing to indicate the trouble ahead. A 911 caller had alerted police that a man had fallen asleep in the restaurant’s drive-thru lane.

Rolfe arrives after Officer Devin Bronsan, who joined APD in 2018.

Brosnan tells Rolfe it took him a few moments to wake Brooks up. His eyes were watery, his speech, slurred, Bronsan says.

Rolfe, sworn in as an APD officer in 2013, takes over the questioning.

Brooks is cooperative throughout, though is clearly, at best, confused. He tells the officers he’s on Old Dixie Highway in Forest Park, some 10 miles away from his actual location: Wendy’s on University Avenue, just off Pryor Street.

Brooks tells the officers he’s had one, maybe one-and-a-half drinks. Subsequent field sobriety tests seem to indicate otherwise. Brooks is unsteady on his feet and a breathalyzer registers a blood alcohol level of .108, slightly above the legal limit of .08.

“I think you’ve had too much to drink to be driving,” Rolfe says. A struggle ensues, and as Bronsan attempts to handcuff Brooks, he bolts away.

The officers warn, “You’re going to get Tased! Stop fighting!”

Dash cam footage captures much of their 41-second struggle to subdue Brooks, and what’s not seen is heard in the audio.

At some point during the encounter, Brooks managed to grab Bronsan’s stun gun.

“Hands off the Taser!” he’s warned.

Brooks ran a few steps then turned, GBI Director Vic Reynolds said during a Saturday afternoon news conference. It was at that moment, Reynolds said, that the officer opened fire.

“It does appear in the video that he is fleeing from the Atlanta police officers, that as he’s fleeing he turns back over his shoulder with what appears to the naked eye to be his Taser that the eyewitnesses told us they saw the individual have that belonged to one of the officers,” Reynolds said. “And as he turned it over, you’ll be able to see on the video the Atlanta officer, literally reach down to get his service weapon and as he gets his weapon, Mr. Brooks begins turning his body away from him, I presume to flee.”

Stewart said witnesses told him that, before administering any aid to Brooks, the officers put on gloves and collected the shell casings. That’s not clear in the body cam footage.

People at the scene can be heard commenting after the shooting.

“That’s messed up, man!” says another.

“Unarmed, nothing violent, and you pull a f—–g  gun, dude,” says a third. “Wow. Both of your careers are definitely done because you just shot a man for no reason.”

As paramedics rush to save Brooks’ life, Bronsan and Rolfe remain on the scene. They are approached by numerous colleagues, each asking if they’re okay. Bronsan says little. Rolfe says he’s still feeling an adrenaline rush.

“I felt blood on my elbow,” he  tells a fellow officer as he searches for a disinfectant wipe. “I don’t know if its mine or his I just want to get it off.”

Rolfe tells another officer that Brooks resisted arrest and gained control of Bronsan’s Taser. Brooks, he said, fired the Taser at him “at least once.”

“We’ll get this cleared up,” one officer can be heard saying.

“Don’t talk to none of these motherf—–s,” another officer is heard saying.

Bronsan was placed on administrative duty pending the GBI’s investigation. Rolfe was officially fired around midnight, not long after Mayor Keisha Lance Bottoms called for his dismissal and announced Shields was no longer running the police department.

“Chief Erika Shields has been a solid member of APD for over two decades and has a deep and abiding love for the people of Atlanta,” Bottoms said. “And because of her desire that Atlanta be a model of what meaningful reform should look like across this country, Chief Shields has offered to immediately step aside as police chief so that the city may move forward with urgency in rebuilding the trust so desperately needed throughout our community.”

Atlanta Police Union representative Ken Allen said the rank and file was “devastated” by Rolfe’s ousting and demoralized at Shields’ departure from the chief position.

“I certainly wouldn’t be proactive if I was an officer now,” he said.

Rolfe, said Allen, was “an exceptional officer” who followed proper procedure in his handling of Brooks’ attempted arrest.

According to the Georgia Peace Officer Standards and Training Council, Rolfe had recently received use of force training. On April 24, he took a nine-hour course on de-escalation options, his record shows. And on Jan. 9, Rolfe was trained on the use of deadly force at the DeKalb County police academy.

He was a member of APD’s High Intensity Traffic Team, according to the department.

In May 2019, Rolfe was honored by Mothers Against Drunk Driving for making more than 50 arrests for driving under the influence during the previous year, according to APD.

As a fellow APD officer drives him back to police headquarters, where GBI investigators awaited, Rolfe asks about Brooks.

“I would like to know his condition,” he says, but no updates are provided.

Brooks had been taken to Grady Memorial Hospital, where he was rushed into surgery. He was pronounced dead soon after.